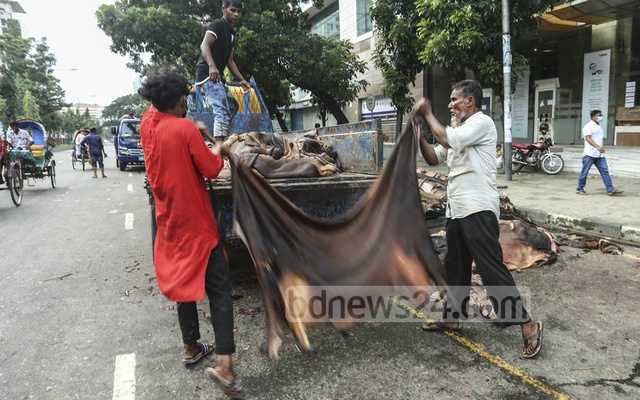 The government lowered the prices ahead of the Eid this year after the merchants had warned that the demand would drop sharply because the tanners have stocks unsold due to the pandemic.

Finally on the Eid day on Saturday, the merchants in Dhaka’s Posta bought the cowhides at Tk 700 to Tk 1,200 apiece, according to Aftab Ali, the president of the Bangladesh Hide and Skin Merchants Association.

The families that sacrificed animals, and the mosques or madrasas that sell donated rawhides got as low as Tk 210 to Tk 400, far below the government-fixed prices. The rates had been over Tk 2,000 per cowhide a few years ago.

Aftab was relieved that a situation like last year’s Eid did not repeat itself when seasonal traders dumped rawhides to rot on the streets after the merchants offered very low prices citing a lack of funds due to bills left unpaid by the tanners.

He claimed the drop in the number of seasonal traders led the prices to fall.

Grocer Abul Kalam in the capital’s Rupnagar said they slaughtered a Tk 110,000 cow, but no one had turned up to buy the hide until the evening.

The mosques in Shyamoli, Agargaon, Mirpur, Rupnagar and some other areas sold the rawhides at Tk 210 to Tk 250. Some said the number of donated rawhides has also dropped as the pandemic led to fewer animal sacrifices than previous years.

Matin Sarker, the general secretary of Bogura Hide Merchants Association, alleged that the tanners did not pay the dues before Eid this year as well, forcing the merchants to offer and collect rawhides at very low rates.

Azam Ali of Bogura’s Sariakandi said they sold four cowhides at Tk 400 each and gave away three goat hides for free.

In Chattogram, the merchants sent their agents away to collect rawhides. The agents worked on contract for fees or slight profits.

Two agents in the city’s Chowmohani said they collected cowhides at Tk 250 to Tk 400 apiece while the sellers gave the goat hides for free.

Most of the rawhides collected annually in Bangladesh are sourced from cattle slaughtered during the Eid. The merchants’ association said they get 220 million square feet rawhides each year on an average.